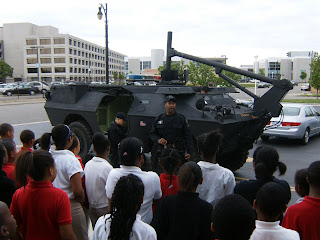 What an exciting day we had today. We were scheduled to be visited by the Special Response Team of the Detroit Police Department (a.k.a. the SWAT team). Well, at 9:30 I got a call saying that the team was dealing with a "barricaded gunman" and wouldn't be able to come. Our hearts sank.
You see, the SWAT team was visiting because of the hard work of Lemuel Spratt. Lemuel wrote a letter this winter to the Detroit police chief explaining why he thought being on the SWAT team was a great job to have. Apparently, the chief liked it enough to forward it to someone on the team, and that person liked it enough to promise to visit our school. Lemuel and all of us had been looking forward to this for a long time. As you can see, we had good reason to be disappointed.
BUT about 45 minutes later, the phone rang again. The gunman had been apprehended and the team was on its way! Hooray! They visited with 5 officers as well as their armored vehicle and their "tank." Officer Brown and his crew taught us all about what the SWAT team does and even let students inside the vehicles. In all, they stayed for over 2 hours and every student in the school got to meet them.
Writing letters can make a difference...what a powerful lesson. Thanks, Lemuel. Great work! 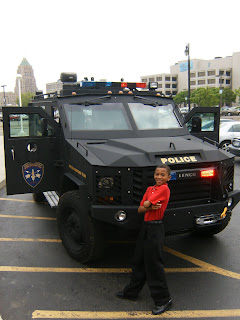